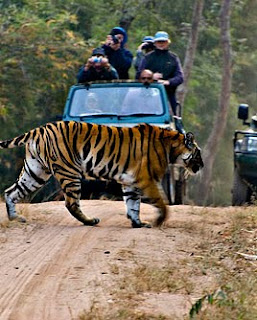 India is a glorious land with numerous attractions. One of the major attractions of Indian subcontinent is wide variety of wildlife. Credit goes to varied quality of topography that supports presence of magnificent variety of birds and animals. India houses several famous wildlife sanctuaries and national parks. The idea was to protect these precious animals from getting extinct. Establishment of sanctuaries in several states also help in protecting these innocent animals from getting poached. Thanks to these parks, numerous species of animals are able to survive and also increasing their population.

Some of the famous national parks in India are,

Gir national park needs no introduction. Perhaps one of the most celebrated parks in india, it is located in Gujarat and is reputed for being the only natural habitat of Asiatic Lions. Kanha national park is famous for hosting tigers and is situated in the state of Madhya Pradesh whereas Bandipur National Park is in southern state of Karnataka. Finally, both Ranthambore National Park and Sariska National Park are based in Rajasthan.

Posted by Discover India at 12:05 AM No comments: